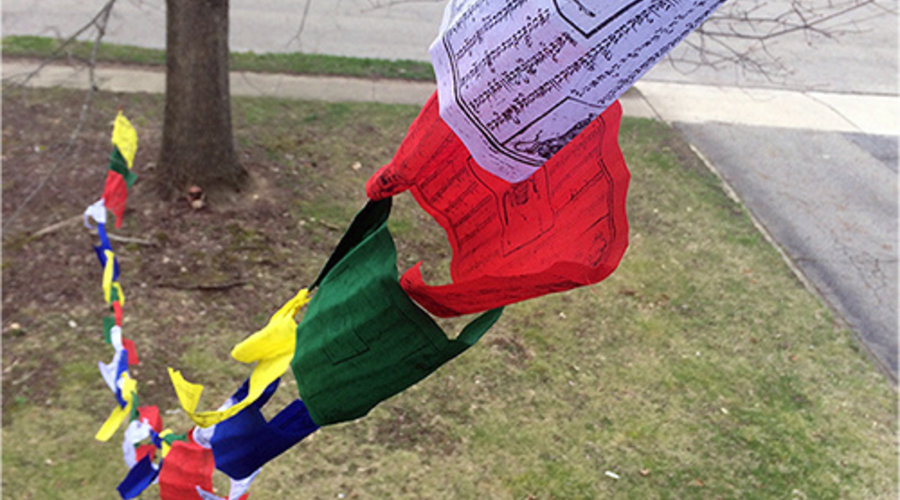 Tibetan prayer flags are traditionally hung in high places to catch the wind so the prayer will be carried out to bless and bring good fortune to all sentient beings. Translated to English, the words on Wind Horse prayer flags say:

"May the rain fall at the proper time.

May the crops and livestock be bountiful.

May there be freedom from illness, famine, and war.

May all beings be well and happy."

We asked one of our high school interns, Daelyn, to do a little research about Tibetan Prayer Flags so we can better understand the tradition. Here is what she uncovered! Tibetan Prayer Flags are colorful, rectangular cloths that hung outside and used to promote compassion, peace, strength, and wisdom. They are also used to carry prayers and mantras through the wind.

Lung-ta flags are hung horizontally in sets of five. The five flags are in order according to their color and meaning: 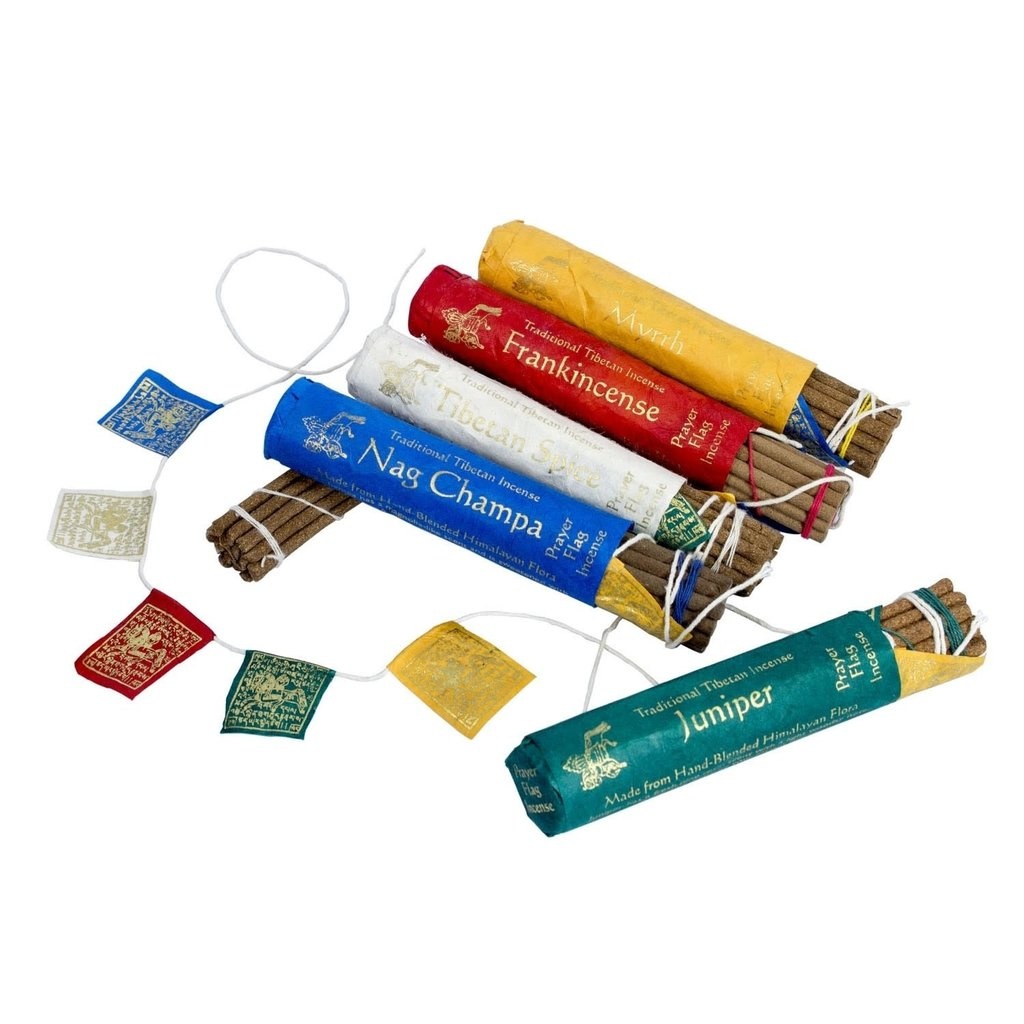 Health and harmony are produced through the balance and order of the flags. All over the world, but especially in South Asia, prayer flags are found in ridges, mountain passes, between trees, rocks and also on top of monasteries, stupas, and temples. They're typically hung diagonally, from high to low.

Danchor flags are used individually and attached to a wooden pole ranging from 3 to 60 feet. These are planted in the ground and can often be seen around monasteries and sacred sites.

The Prayer Flags predate Buddhism in Tibet. They were originally hung in response to banners worn by warlords that were prevalent during the 7th century.

Originally, they were hand painted one by one and had to be commissioned. Today, Tibetan prayer flags are printed with mantras prayers, and auspicious symbols using a woodblock printing method, making it easier to make and to get.

Attitude when raising prayer flags is very important. As Timothy Clark explains: “If they are put up with the attitude ‘I will benefit from doing this’ – that is an ego-centered motivation and the benefits will be small and narrow. If the attitude is ‘May all beings everywhere receive benefit and find happiness,’ the virtue generated by such motivation greatly increases the power of the prayers.”

Same goes for when taking flags down. As the flags fade, they become a permanent part of the universe. Old flags are replaced by new ones on the Tibetan New Year. Because of the sacred writings on the flags, they should not be used in clothing or thrown away. Old prayer flags should be burned in order to show traditional Tibetan respect and carry prayers to the heavens. There are auspicious and inauspicious days to hang prayer flags, based on the Tibetan calendar. According to tradition, if you hang them on the wrong dates you will receive obstacles instead of success.

The following are the wrong dates according to the Tibetan calendar:

Generally, Monday is a good day to hang prayer flags and Friday is a very good day.

Gloabl Gifts has a variety of handmade Lung-ta (horizontal) prayer flags, including Wind Horse, Medicine Buddha, Buddha Mantra, Lucky Signs, and more. These flags are ethically-made by Tibetan refugees, and some are blessed by Tibetan Nuns. 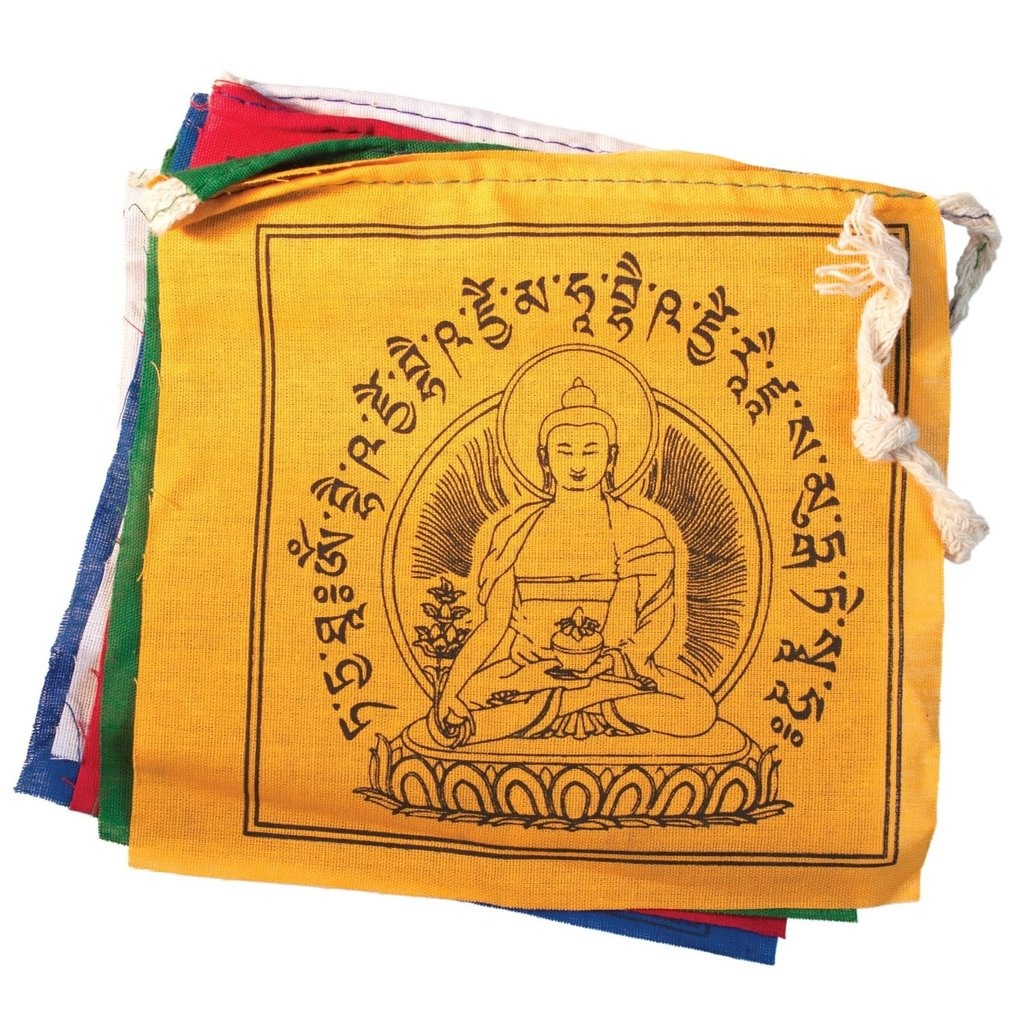